My Day and Grumpy Twins

Today I did something, which these days is a rarity, I did what I wanted to do as opposed to what needed doing!
When the twins had their nap instead of remaking beds, ironing or polishing I saw my chance to go outside and potter about.
As house jobs jobs and climbing twins have taken over my time so far this week garden jobs have been left. I love being able to get outside and do a bit of gardening when I get chance, I find it such a satisfying and relaxing way to spend a sneaky quiet hour.
My first job was to cut the sweet peas. As they haven't been cut for a day or two they were an abundance of blooming flowers. Now all of the vases around the house have been refreshed. I have never had so many cut flowers in the house!
I then moved onto our vegetables, hubbys pride and joy (and mine if I'm honest). I trimmed the tomatoes, peppers and cucumbers and inspected the courgettes. I am so excited to have a harvest as this is our first year! Then the fun of cooking and eating what we have grown comes! I have had 2 grumpy toddlers this afternoon so I was grateful for my hours time out earlier. Im putting their grumpiness down to the heat so tomorrow I need to have a good think during their nap of ways to distract them and keep them cool! Surprisingly bed time went really well. I did think that we would struggle but they were straight out like two little lights. Fingers crossed they don't give us hell tonight. A full nights sleep would be fantastic and to still be in bed come 6am would be amazing after our 5am early starts! However I could do with a 6am start as I've got ice cream cone cakes to ice for Joseph's school summer fair, pics will definitely follow! 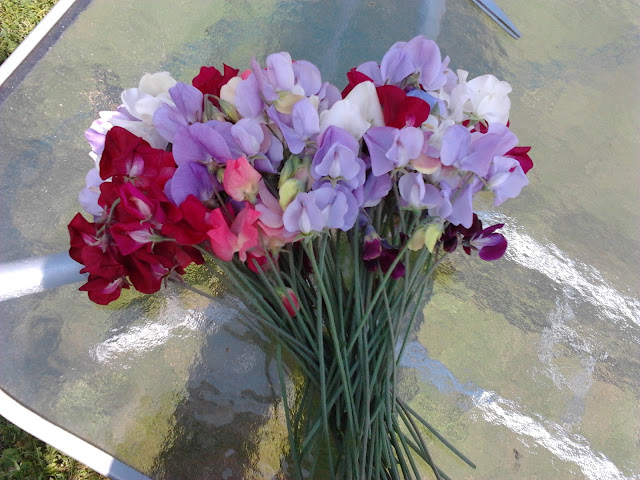