McDonald's has been a family favourite for years. I remember going for a McDonald's as a child and have fond memories of us taking my late grandmother who asked where the cutlery was. I am sure that there are families all over the world that have McDonald's memories too. They are a worldwide brand who everyone knows and loves. You can guarantee that where ever you are in the world, if you order a Big Mac it is going to taste exactly the same as it does at home.

Back in 2016 I wrote a post about the evolution of McDonald's after visiting one the newly refurbished restaurants in Leeds. While I was there I even made my very own Big Mac using two all beef burgers, special sauce, lettuce, cheese, pickles, onions all in a sesame seed bun.

So when I was asked if I would like to write about how McDonald's are celebrating 50 marvellous years of the Big Mac, I could not wait to, literally, get tucked in!

Back in February 1968 the Big Mac was created by an American McDonald's franchisee called Jim Delligatti in Pennsylvania. Delligatti originally wanted to call his creation The Aristocrat however after careful consideration McDonald's decided to go with Big Mac. That is how a legend was born! After the success in the USA McDonald's brought the Big Mac and their brand to the UK back in 1974 when they opened their first restaurant on Woolwich High Street. Since introducing the Big Mac to the world McDonald's have not looked back and is now enjoyed in over 100 countries around the world!

Whenever we go to McDonald's my regular order is always the legendary Big Mac. My Favourite ingredient has to be the special sauce. This top secret sauce, in my opinion, makes this a truly iconic burger and took Delligatti two years to perfect! To celebrate 50 years of the Big Mac McDonald's have released two limited edition burgers. Both based around the classic burger but have only changed the size. Now available in all McDonald's, there are three different sizes of Big Mac, the Mac Jr, which is made with all of the classic ingredients but with just one less burger, the original birthday burger and finally the Grand Big Mac, yes, an even bigger version of the classic!

Over the years there have been hundreds of McDonald's adverts and to celebrate they have been challenging people to complete the Big Mac ingredients tongue twister in under four seconds.

Check out this video of 90's pop stars Jason Donovan and Chesney Hawkes battling it out to not only say the tongue twister but singing it!

Have you tried any of the celebratory Big Macs yet? If so, which is your favourite? We did dig into a Grand Big Mac the other week which was immense and I am determined to try the Mac Jr before it goes! 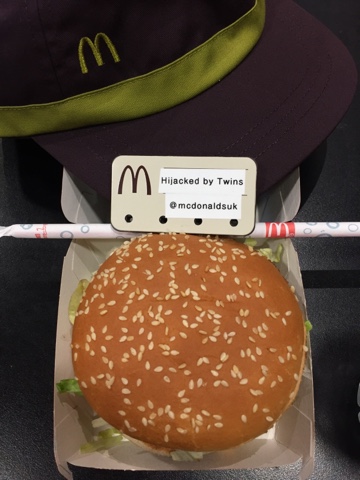 Disclosure: This is a collaborative post
Posted by Hijacked by Twins at 12:36