2015: The Year of the Japanese Super Food and Japanese Soy Tuna Recipe 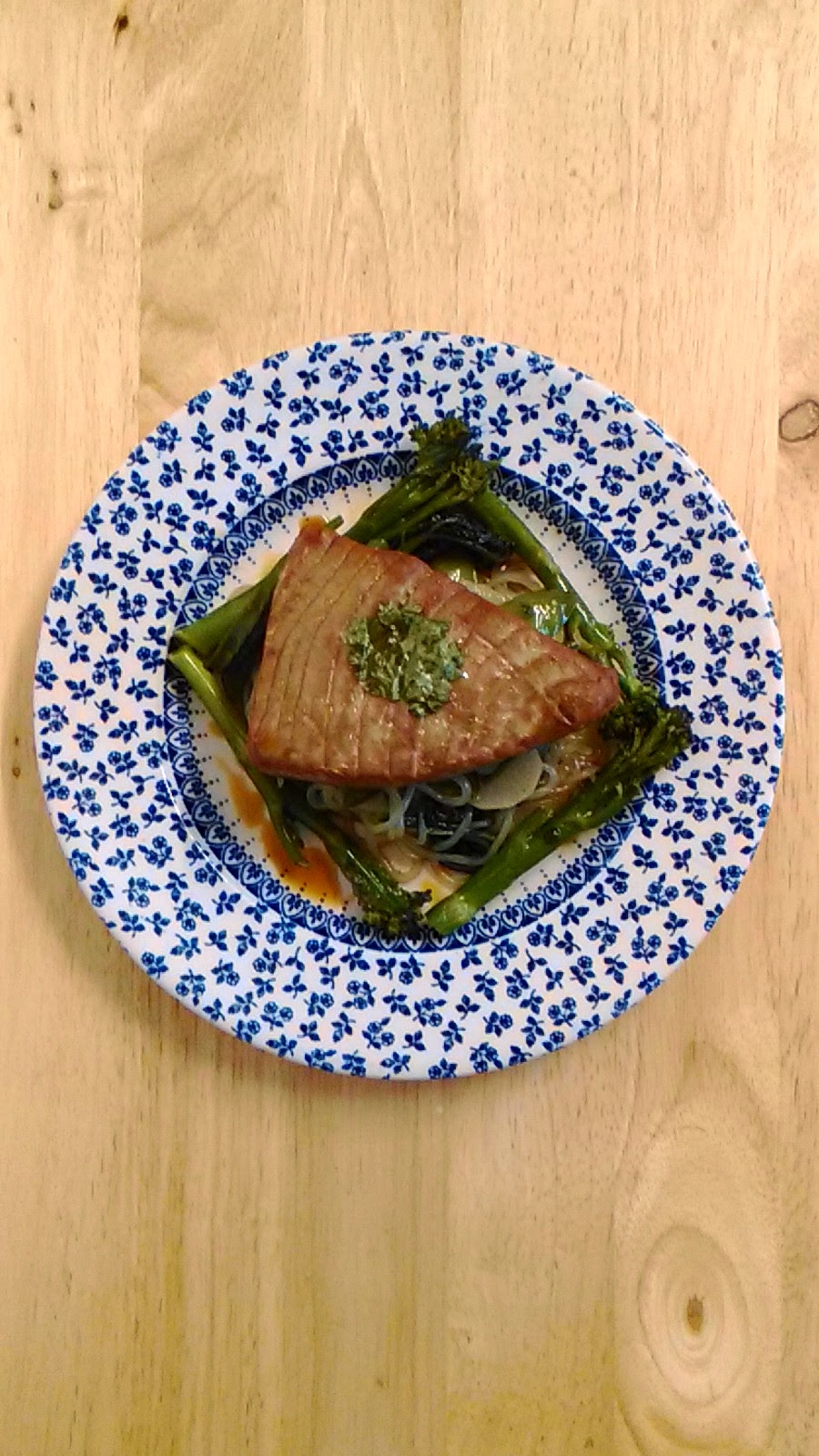 I was recently asked if I would like to try some Yutaka Japanese Super Foods. I love trying new cuisines and was curious to try more Japanese foods. The only Japanese food that I have tried, so far, is sushi, which I love, so I had a feeling I would like what I was sent.

When I opened to box I was excited to see that I had some foods which were completely new to me. Thankfully there was some information included to tell me me about each of the products.

I am yet to use the Konnyaku, I need to do some more research into how to use this product in cooking but it is called the "New Tofu". It is made with over 90% water making it virtually calorie, sugar and fat free! It has been used in Japan for over 1,500 years and some of the health benefits are that it aids digestion, lowers cholesterol, prevents high blood pressure and normalises blood sugar levels.

In this recipe I have used the Tamari Soy Sauce which unlike regular soy sauces it has been made wheat free and has a more complex but smooth taste. I have also used the Shirataki Noodles which in Japan are known as the "miracle noodles". They are virtually calorie free, in 200g there are only 10 calories! They are light in calories but are extremely filling and nutritional. They are made from the Konjac plant and water. They are full of dietary fibre which helps to detox and cleanse the body.

This recipe is not only low in calories and super healthy but is full of delicious flavours! 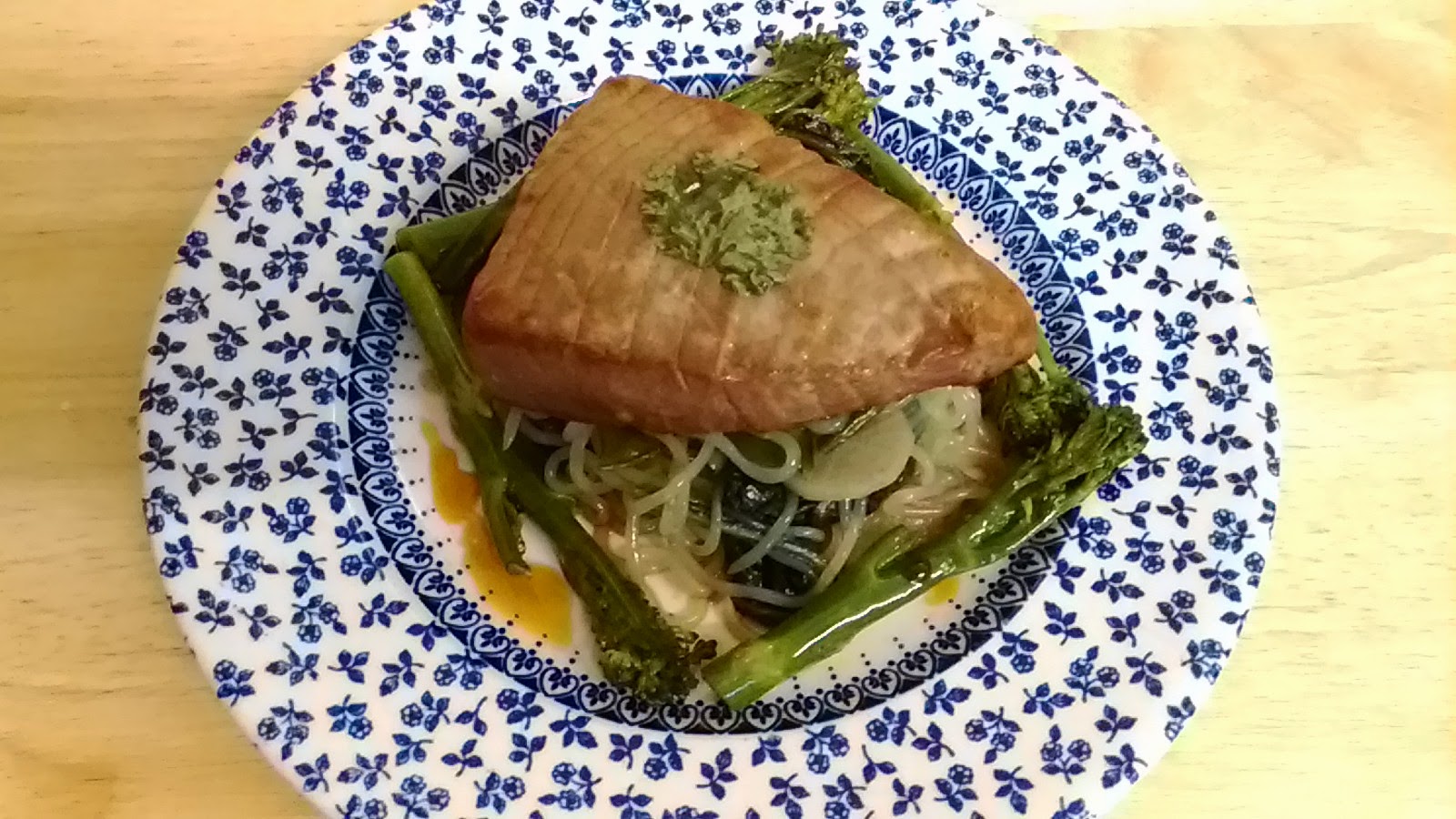 2 - Grill the tuna steaks under a high heat for 10 minutes, 5 minutes on each side

3 - While the tuna is cooking stir fry all of the vegetables, except for the coriander, in 1 tbsp of olive oil 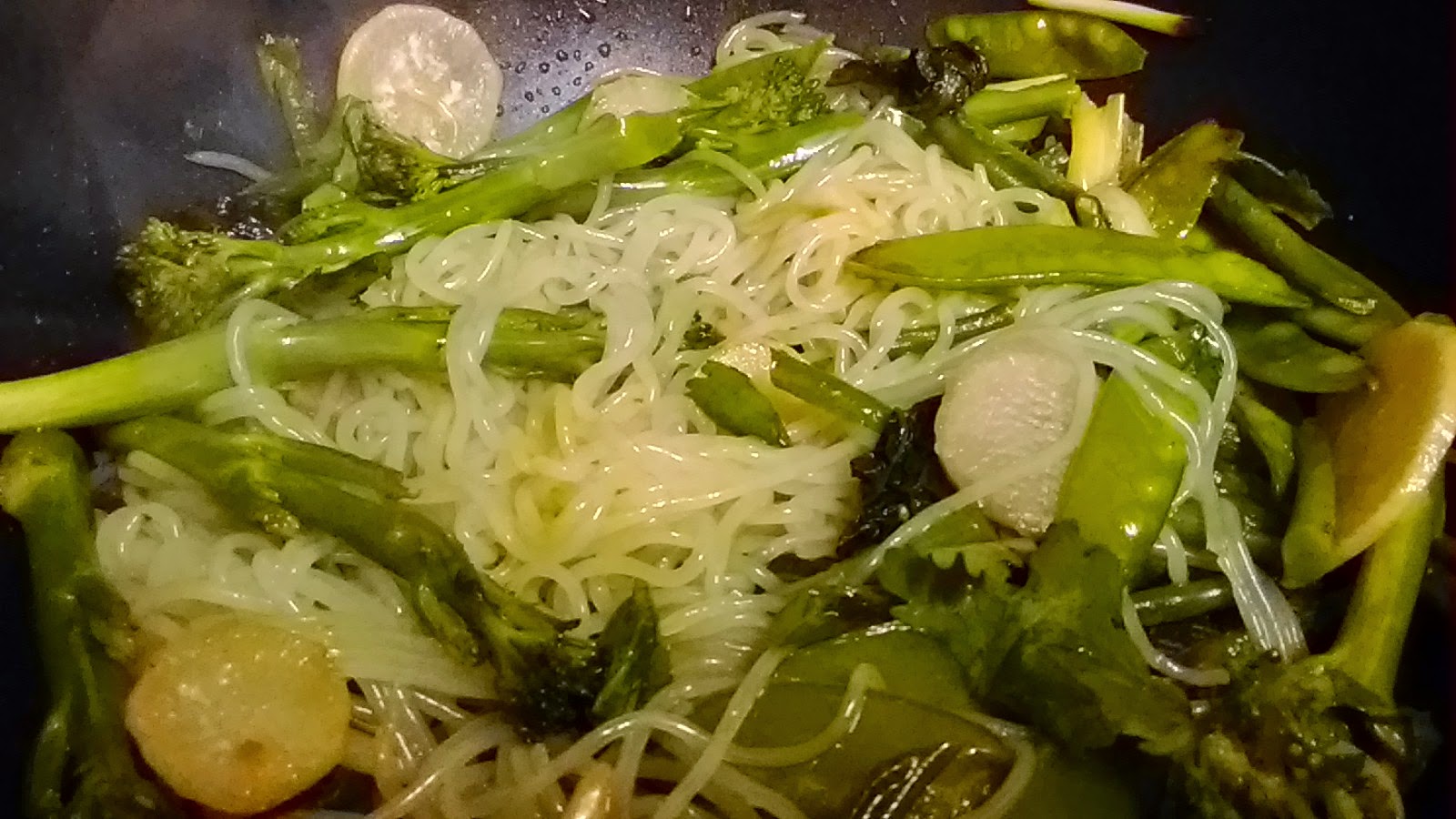 5 - Serve the tuna on a bed of stir fry and drizzle over a little soy sauce, amount depending on taste This is such a quick and easy meal that is incredibly healthy. What more could you want? A super healthy meal that tastes absolutely delicious! I will definitely be using the Shirataki noodles more in the future as I can eat them without a any of the guilt. 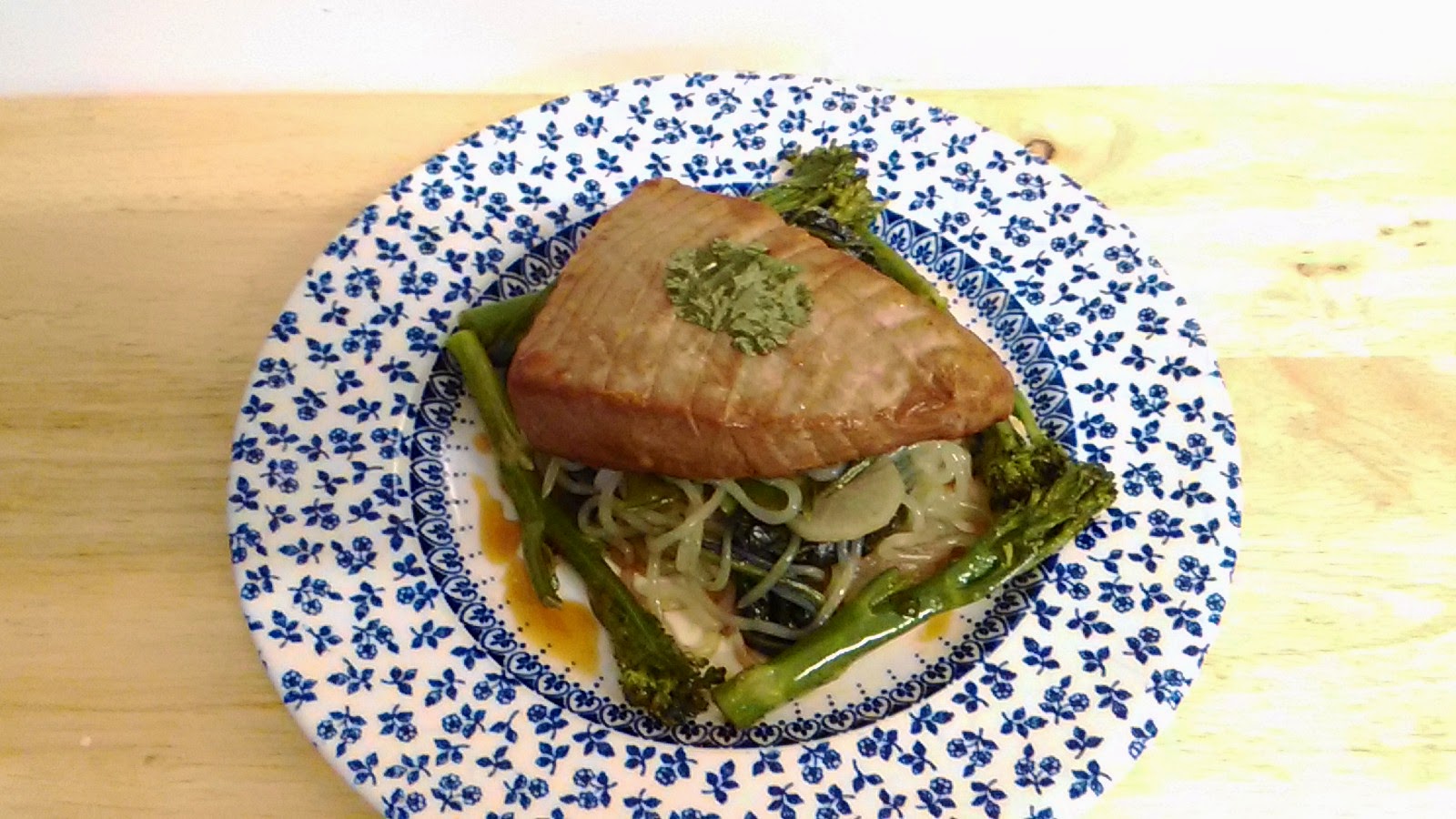 I made this meal for the hubby and I however the twins did keep on taking noodles to eat, they loved them as much as we did! 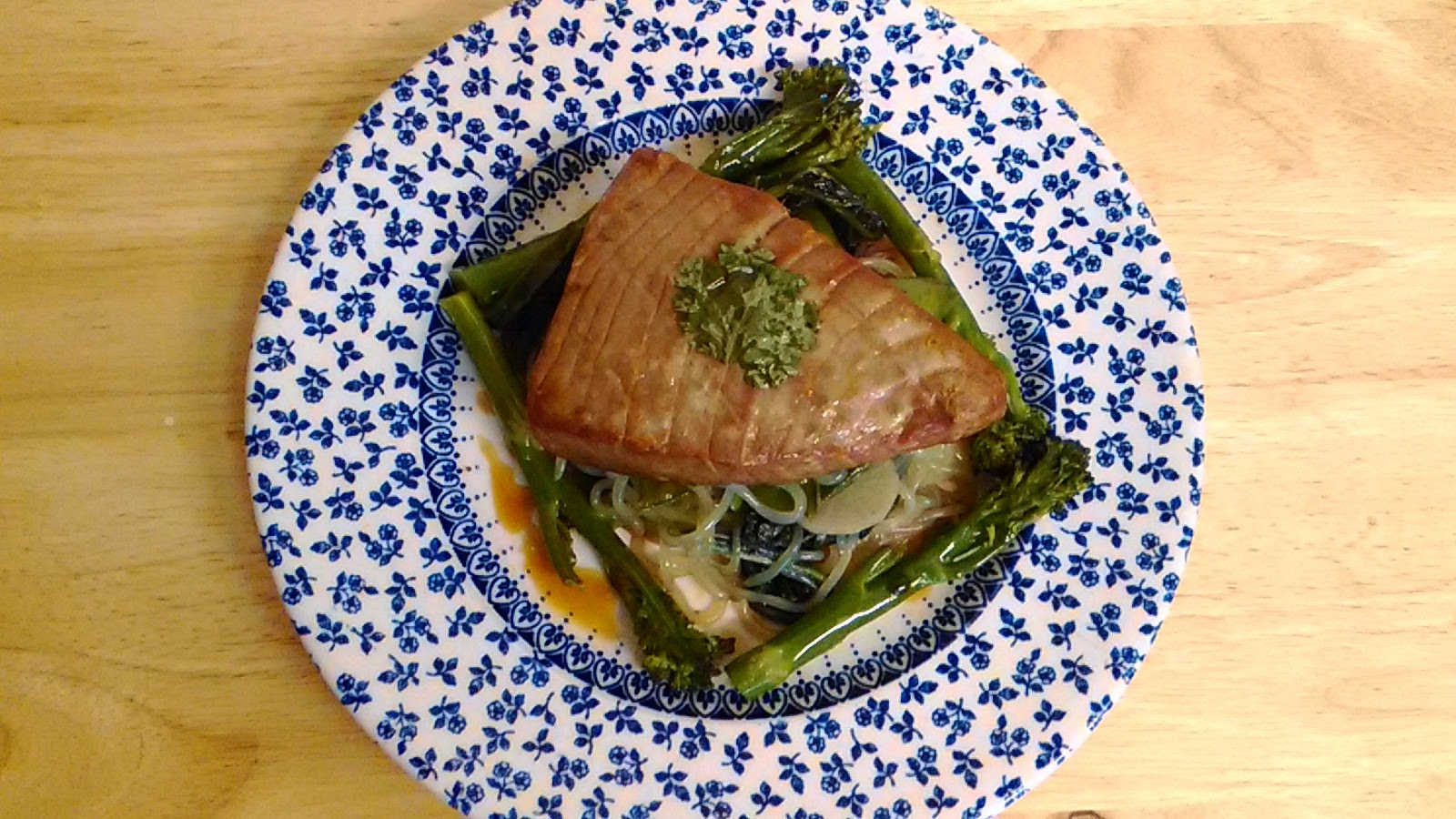 Disclosure: I was sent the selection of Japanese food from Yutaka. No payment was received. All views and opinions are my own and 100% honest. 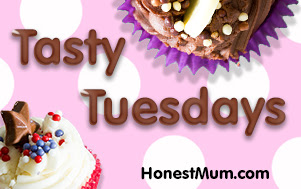