This week has been full of outdoor play. It is so liberating to be able to go out in the fresh air without getting either wet or blown away!
I am also pleased to say that, at last, we are getting back to our usual healthy, bug free selves!
Joseph went back to school on Monday so this week we have been getting back into our weekly routine.
Here is our week in pictures... 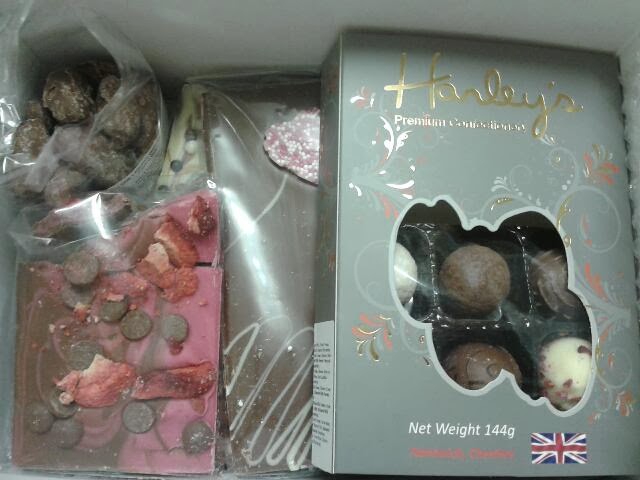 Monday was a day full of jobs. I spent the whole day cleaning and doing housework. After being ill and having the hubby home I put chores to one side so that we could spend some quality time together, which we all thoroughly enjoyed. It just meant more work trying to catch up, but it was worth it. It wasn't until the kiddies were all in bed and I sat down, I realised I had not taken a single picture! So for all of my hard work I treated myself to some of the delicious Hanley's chocolate that the hubby got me for Valentines day!
Tuesday 25th February 2014 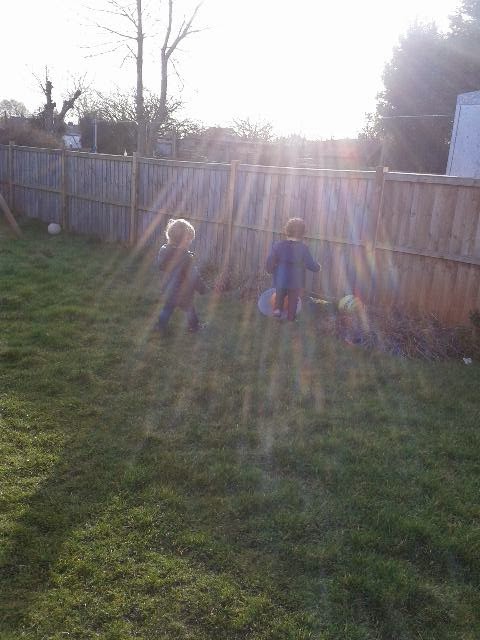 At last, a sunny day! This morning, after we had taken Joseph to school, the twins explored the garden and enjoyed their new found freedom! When it was time to go in, it took a lot of persuading and after a tantrum, and a little longer in the garden, I managed to get them inside. These two are going to love playing outside, just as their big brother did at that age.
Wednesday 26th February 2014 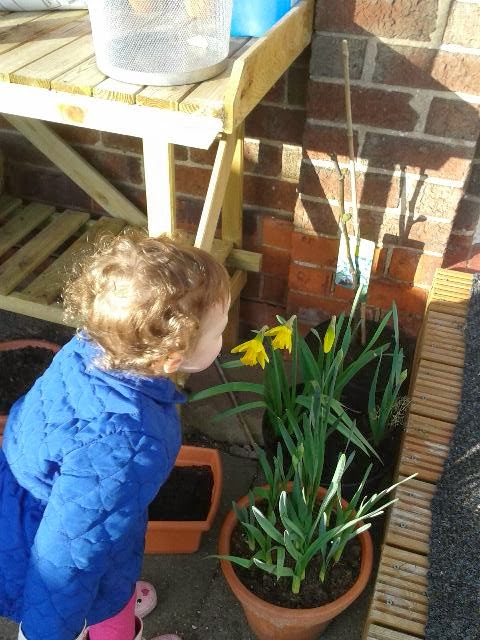 As soon as we got back from the morning school run the twins wanted to be out in the garden again. At last we have some signs that spring is just round the corner. Isabella found the daffodils today and kept shouting excitedly "Look! Mummy! Flowers!" she'd run up to the daffodil, sniff it, say "Urrrrr" run off, then do it all over again!
Thursday 27th February 2014 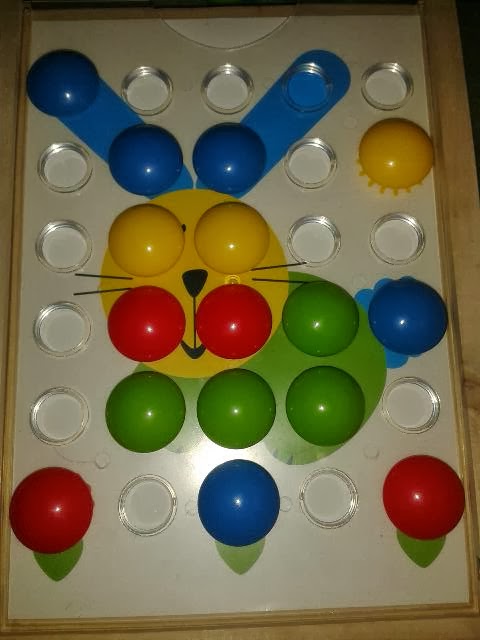 The twins got these colour matching activity boards for Christmas which we put away. When I was getting them both ready for bed on Thursday night Isabella found the peg board and brought it over saying "this mummy". When they had their pj's on and we were waiting for hubby to bring the milk up I sat with her while she had a go. I was astounded that on her first go, she knew where each and every peg went without me needing to tell her or correct her! I can't believe how much they are growing. They really are coming on in leaps and bounds!
Friday 28th February 2014 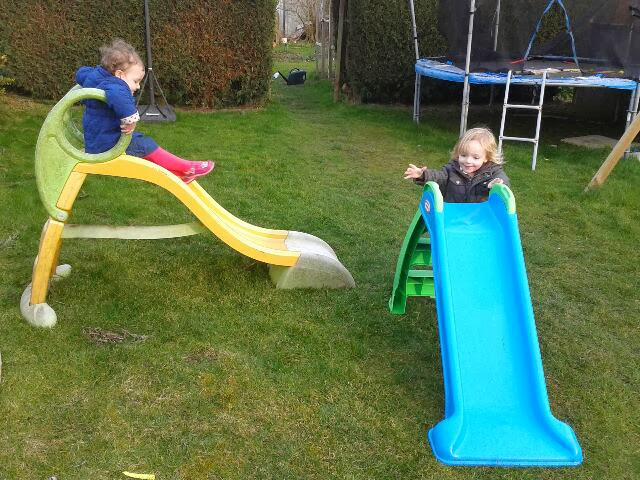 The twins are certainly growing in confidence! After trying all week, on Friday, they mastered climbing up the steps, sitting down and sliding down the slide on their own. There really is no stopping them now!
Saturday 1st March 2014 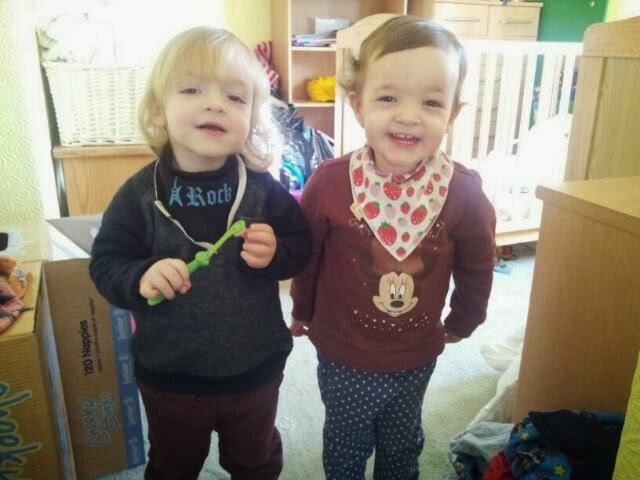 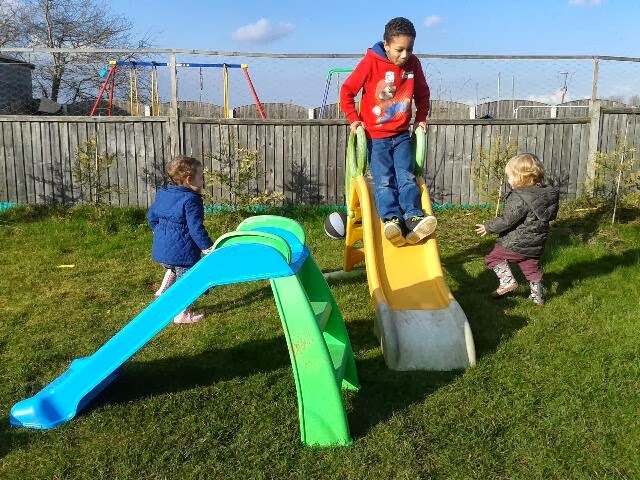 While I was out with Joseph in the morning I received the picture of the twins from hubby. These days it is so hard to get them to both stand still together for a photograph. This picture made my heart fill with pride and even though I didn't take it, I had to share it!
All 5 of us enjoyed some garden time on Saturday afternoon. Hubby started doing some gardening jobs and tidying up after the winter while I played with the kids and snapped lots of pictures! When Joseph saw that the twins could do the slides on their own he couldn't resist joining in which was lovely to see. He is such a great big brother and really does dote on them! They certainly think the world of him too!
Sunday 2nd March 2014 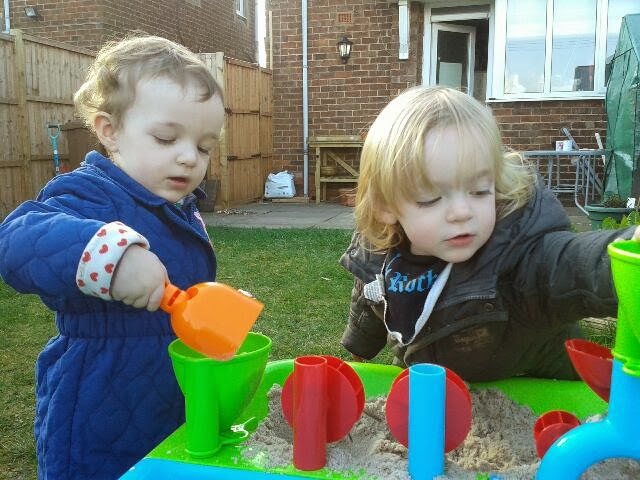 This week, my Silent Sunday picture, really does sum up our week. Lots of out door play and new experiences for the twins! For their birthday one of their auntie and uncles bought them a sand and water table. Hubby put it all together for them and filled one half with sand. They loved it! Their hands were in and the spades were out. When the weather gets warmer they will also love the water but for now they are having so much fun with the sand!
We have had such a lovely week and have been lucky to have more spring like weather. I am just hoping that it is here to stay as I now have twins that want to be outside at every available opportunity!
Follow my year in pictures at Blipfoto
I'll be sharing my 365 Project with The Boy and Me