This last month we bought a lot of meat from the local market.
We always used to buy our fruit, vegetables and meat from the market before the twins were born. But after their arrival it was not as easy.
However now that they are bigger it will be more economical for us to start buying meat there again. I now have 5 mouths to feed and Joseph alone is like a bottomless pit!
So last week my mum and I went to the market and we got some great buys!
I have always found ht the quality of meat is better at the market than the pre packed supermarket ones.
I have found that the pre packed meat often has a lot more fat come off during cooking and can often be lacking in flavour.
During our last trip we stocked up and now have enough meat in the freezer to last us until the end of the month.
Our top buy had to be the shoulder of pork!
I have often wanted to cook pulled pork but thought that the joint of meat would cost a lot more than it actually did.
I didn't realise that a shoulder of pork is one of the cheapest cuts of pork. But if it is cooked slowly is falls apart and you would never know that it as a cheap cut!
We got a joint that weighed 3kg and paid only £10!
The joint was cut in half and we had a piece each.
This is how I cooked this great budget meat...
Chinese Five Spiced Pulled Pork
Ingredients
1.5kg pork shoulder
Chinese five spice
Method
1 - Generously rub the shoulder of pork with the Chinese five spice
2 - Place the joint in a slow cooker on a low heat and cook for 7 hours
3 - When the meat is cooked remove from the slow cooker and cut off the top layer of fat
4 - Empty the fat out of the slow cooker
5 - Shred the joint using two forks then return to the slow cooker to keep warm
There are so many ways that you could serve the pulled pork.
On the first night we had half of the puled pork with fresh homemade warm rolls, salad and homemade coleslaw (sliced cabbage, white onion, grated carrot, mayonnaise and wholegrain mustard).
This is a healthy meal for under £5! 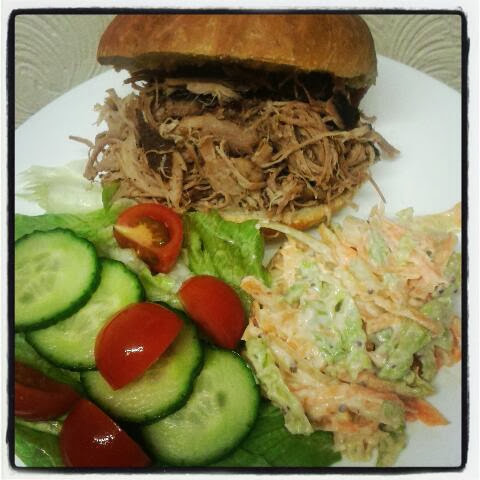 On the second day there was enough meat for hubby to take some in a sandwich for work while I also had some with coleslaw.
For our evening meal we had a pulled pork stir fry with rice noodles in a coconut, chili and lemongrass sauce.
This delicious meal cost £5.50 to make but only served the hubby, Joseph and I. But still at £1.83 per serving I think that it is great value for money.
﻿ 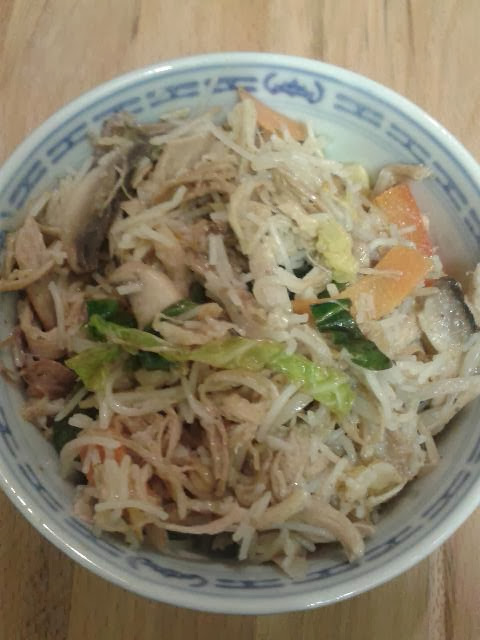 We are taking part in The Great British Budget. This s a campaign that I volunteered to take part in as it is a subject close to my heart.