One pudding that my hubby loves is bread and butter pudding.
Until recently, this has been a pudding which I have hated!
Whenever I have tried it in the past it has had such a slimy texture I have not been able to eat it.
After having my hubby go on and on about how I never make one of his favourite puddings I gave in.
I made my first bread and butter pudding!
As I baked it, I had to try it.
I do not like baking something with out trying it.
I found that my bread and butter pudding unlike others I have tried was not slimy and had a lovely crunch to the top.
Now I like bread and butter pudding!
I had some milk bread that needed using this week.
This got my baking head!
This is what I came up with...
Apple and Cinnamon Bread and Butter Pudding
Ingredients
Milk bread about 18 slices
Butter
1 apple, sliced
100g dried mixed fruit with candied peel
Cinnamon
400ml full fat milk
2 eggs at room temperature
25g caster sugar
Method
1 - Grease an oven proof dish with butter
2 - Spread butter onto one side of the bread slices
3 - Arrange a layer of bread slices on the bottom of the dish - butter side up
4 - Add a layer of sliced apple, a sprinkling of cinnamon and scatter a hand full of dried fruit over the top
5 - Add a second layer of bread slices with another layer of the remaining apple, a sprinkling of cinnamon and dried fruit - reserve a hand full of dried fruit on one side
6 - Add the final layer of bread slices and top with a sprinkling of cinnamon
7 - To make the custard heat the milk in a pan until just below boiling point
8 - While the milk is heating beat the two eggs together with the caster sugar until a light yellow
9 - Gently pour the hot milk into the bowl with the eggs and sugar stirring continuously
10 - Once all the milk has been added pour the custard over the bread
11 - Leave to soak in for 30 minutes
12 - Heat the oven to 180C
13 - Place the pudding in the oven and bake for 20 minutes
Before serving scatter the remaining dried fruit over the top. This pudding is delicious served with custard, cream, ice cream or even on its own!
The apple and cinnamon add an extra layer of flavour which I am sure will convert anyone who does not like bread and butter pudding!
It did me!
Enjoy x 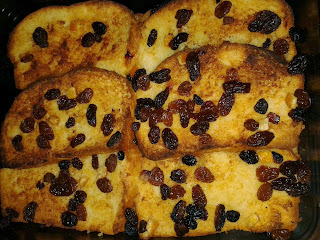 A scattering of dried fruit
to finish off the end product! 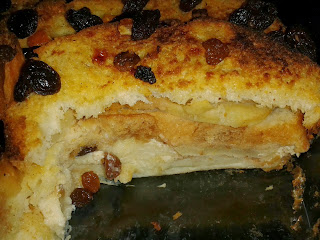 The delicious apple layer within the pudding
Posted by Hijacked by Twins at 16:20