Our Premature Twins - Hospital Check Up

Today I am a bag of nerves.
Today the twins have got their 6 month check up with the paediatrics at the hospital.
The day before and on the day of the appointment I always get myself quite worked up. It is never a good trip to the hospital, not because we get bad news about the twins health, but because they hate going so much. They hate being messed around and are both shy, Isabella more than Taylor but having strangers looking at them is enough for the pair of them to scream the whole time we are there.
Ever since their first out patients appointment, I have got my hopes up that they would be discharged because there really is nothing wrong with them.
Yes, they were 5 weeks premature, but that all.
Thankfully neither have any health issues now and are both fit and healthy toddlers.
The last 3 appointments that we have had I have left in tears because I had got my hopes up that it would be our last visit.
So, you would have thought, by now, I would know better than to set my heart on being discharged. But for the forth time, I have done it again.
My hope are up, and they are way up there this time!
If they do not discharge them today I think I might challenge it and ask exactly why they need to see them again as it stresses both them, hubby and myself.
Thankfully the twins did not have a long stay in neonatal care after they were born.
Our babies were born at 34+6 weeks by emergency c section due to my waters breaking and labour starting.
﻿﻿Isabella was the lead baby and was breech while Taylor was transverse so there was no chance of a natural birth as I had hoped for earlier in my pregnancy.
Isabella was born weighing 5lb 13oz and 2 minutes later Taylor was born weighing 6lb 0.5oz. Isabella was taken straight into neonatal intensive care after we had a quick look at her. Taylor was given to hubby so we got to see him for a couple of minutes before he too was taken.
It seemed like a lifetime in recovery waiting to find out if my babies were ok.
As soon as I could leave recovery they took my bed over to a room just off the neonatal ward and I saw and held my beautiful little girl for the first time.
But I couldn't see my beautiful boy.
Taylor was having trouble breathing so he had been placed straight into an incubator and had a c-pap placed over his nose to give him oxygen. I wanted to hold my baby so much but wasn't able to. It was heartbreaking to see him in there and here him whimpering. We were so worried about him as his condition went up and down.

Isabella was doing well to start with but then she developed jaundice so was being tube fed and had to spend time on the billy bed.

Thankfully after a few days Taylor made huge improvements and was taken out of the incubator and placed on a billy bed as he too had developed jaundice.
I stayed with them for 1 week before I was discharged. I had to be discharged for my sanity and for my other baby, Joseph. He really did struggle during the week that I was in hospital and he needed me at home for a bit more normality in his life. But leaving them both there was the hardest thing I have ever had to do.

When they were moved from the neonatal intensive care room into the special baby room we were over joyed, they were going in the right direction.
Then when they were moved into the nursery room we knew that they were only one step away from home!﻿﻿﻿﻿
We then got the news that we were waiting for.
﻿﻿They wanted to discharge the babies so they asked hubby and I to go and stay in the nicu flat and have the babies with us for the night with a view to discharge them the next day. That night we got no sleep at all and were exhausted but we were overjoyed when, after a long day, they said that our babies could come home! 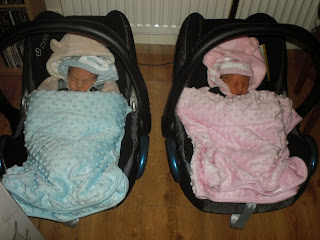 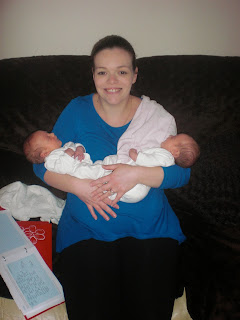 At last, our babies were home
They were there for only 12 days, I say only, but at the time it felt like an eternity.
When I remember their first weeks it still pulls at my heartstrings, I think it always will. Joseph was a neonatal care baby too and I feel that I missed so much with him in the 6 weeks that he was in. I spent every moment I could with him but I'm sure many mums that have had a child in neonatal care straight after they were born will say the same.
However, now, when I look at my beautiful children it is hard to believe that we went through so much.
They are now both fit and healthy toddlers who are like any other child their age.
I just hope that, today, the doctors see that and say goodbye to us.