Well we have done just over one week of the summer holidays and I am still smiling and have still got all of my hair!
After hearing "mum I'm bored" on the first day, I thought "oh no, this is going to be a long 6 weeks!". However much to my astonishment, it has got better. Whether I'll be saying this in a few weeks time is another matter.
I have found that the more I involve Joseph in my day to day jobs and keep him up to date with what we are going to do, the better he has been.
Each morning he has helped me go down the garden to tend to the chickens and to check our vegetables. He has thoroughly enjoyed helping me to harvest any vegetables that are ready and is starting to gain a real interest in what goes on and is asking plenty of questions. Yesterday we even had an impromptu water fight. Ok, maybe water fight is not the best way to describe it, I had the hose and chased Joseph around the garden spraying him. He was giggling so much, the more he giggled the more I chased him and the wetter he got. Having that bit of quality time makes all the difference.
Another thing that he has been asking to do is baking. Joseph does love to bake buns, like his mum, but it's also another opportunity to have that bit of time together. So while tea was cooking we got baking. I made a basic sponge batter, with the help of Joseph's weighing skills, and gave him half in a bowl and let him go crazy with his buns. I told him that he could mix in whatever he wanted as they were his buns. I played it safe with banana and oat muffins, whereas Joseph added rainbow drops, chocolate chips and banana! Quite a mixture, but he enjoyed it, and that's what it was all about out.
Today I had half an hour's quality time with all 3 children, which believe me does not happen very often at all. I had Taylor sat between my legs, relaxing with his cars. Isabella was trotting around playing with whatever took her fancy and kept coming over to jibber jabbering to me. Joseph was laid on the settee behind me playing with my hair and chilling. It was such a relaxing, tranquil half an hour, and one that I know I will treasure.
After the children had charged their batteries it was back to the normal manic house that we know and love.
Dinner was late but hey time like I've had this afternoon with the children is more than worth all the rushing about after. 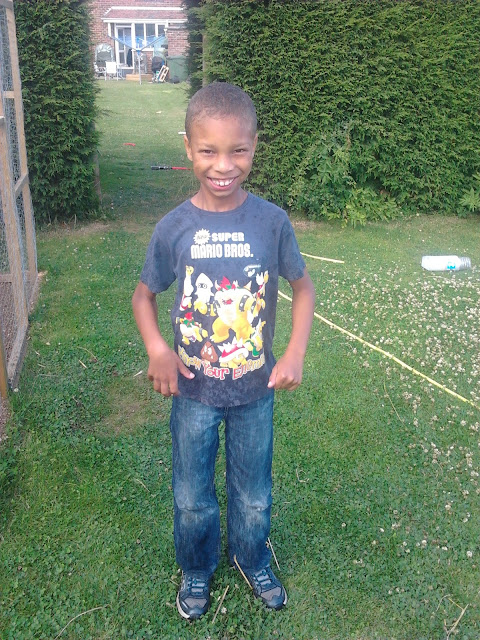